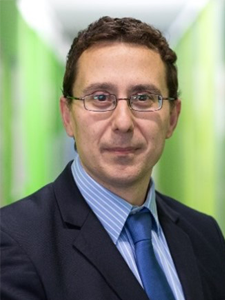 Dario Farina received Ph.D. degrees in automatic control and computer science and in electronics and communications engineering from the Ecole Centrale de Nantes, Nantes, France, and Politecnico di Torino, Italy, in 2001 and 2002, respectively, and an Honorary Doctorate degree in Medicine from Aalborg University, Denmark, in 2018. He is currently Full Professor and Chair in Neurorehabilitation Engineering at the Department of Bioengineering of Imperial College London, UK. He has previously been Full Professor at Aalborg University, Aalborg, Denmark, (until 2010) and at the University Medical Center Göttingen, Georg-August University, Germany, where he founded and directed the Department of Neurorehabilitation Systems (2010-2016). Among other awards, he has been the recipient of the IEEE Engineering in Medicine and Biology Society Early Career Achievement Award (2010), The Royal Society Wolfson Research Merit Award (2016), and has been elected Distinguished Lecturer IEEE (2014). He has also received continuous funding by the European Research Council since 2011. His research focuses on biomedical signal processing, neurorehabilitation technology, and neural control of movement. Professor Farina has been the President of the International Society of Electrophysiology and Kinesiology (ISEK) (2012-2014) and is currently the Editor-in-Chief of the official Journal of this Society, the Journal of Electromyography and Kinesiology. He is also currently an Editor for Science Advances, IEEE Transactions on Biomedical Engineering, IEEE Transactions on Medical Robotics and Bionics, Wearable Technologies, the Journal of Physiology, and IEEE Reviews in Biomedical Engineering. Professor Farina has been elected Fellow IEEE, AIMBE, ISEK, EAMBES, Sigma Xi.